What if monkeys could talk? 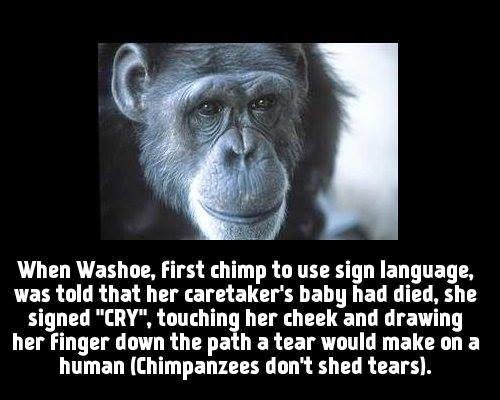 Washoe is an approximately 36-year-old female chimpanzee who has been taught to communicate using American Sign Language .

Washoe uses ASL to communicate with the human researchers and caretakers as well as with the four other chimpanzees involved in the project.

This project has changed the way we look at our closest relatives and serves to improve conditions of captive chimps by alleviating their boredom.

...or use a monkey picture in your facebook profile and promote this amazing animal.

This video segment explores the use and production of Loulis, the only non-human primate to learn a human language in the way that human children most typically do: from his mother.

Further, the work of R. Allen and Beatrix T. Gardner continued with several other young chimpanzees that became Loulis adopted older siblings (Moja, Tatu, & Dar) and who helped Loulis to develop his use of American Sign Language within the social milieu.