What is Monsanto GMO? 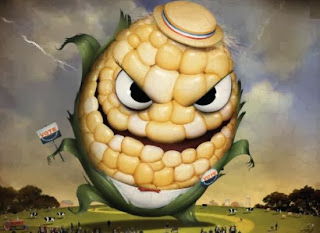 Poor Johnny doesn't like "healthy" food. What could possibly
persuade him to eat all his "veggies"?


From http://infomaticfilms.com/ and sponsored byhttp://naturalnews.com/, this new animated cartoon covers all the basics on why GMOs are dangerous.

Want to know more about GMOs and why they are a serious threat to not only mankind, but the environment and natural ecosystem as well? Then here are some excellent articles, websites and research links for you to have a look at and learn more!

But firstly, a brief introduction about what a GMO is, 5 reasons why we should avoid consuming them at all costs and some of the health risks GMOs pose.

A GMO (genetically modified organism) is the result of a laboratory process of taking genes from one species and inserting them into another in an attempt to obtain a desired trait or characteristic, hence they are also known as transgenic organisms. This process may be called either Genetic Engineering (GE) or Genetic Modification (GM); they are one and the same.

1. GMOs are unhealthy.
The American Academy of Environmental Medicine (AAEM) urges doctors to prescribe non-GMO diets for all patients. They cite animal studies showing organ damage, gastrointestinal and immune system disorders, accelerated aging, and infertility. Human studies show how genetically modified (GM) food can leave material behind inside us, possibly causing long-term problems. Genes inserted into GM soy, for example, can transfer into the DNA of bacteria living inside us, and that the toxic insecticide produced by GM corn was found in the blood of pregnant women and their unborn fetuses.

Numerous health problems increased after GMOs were introduced in 1996. The percentage of Americans with three or more chronic illnesses jumped from 7% to 13% in just 9 years; food allergies skyrocketed, and disorders such as autism, reproductive disorders, digestive problems, and others are on the rise. Although there is not sufficient research to confirm that GMOs are a contributing factor, doctors groups such as the AAEM tell us not to wait before we start protecting ourselves, and especially our children who are most at risk.

2. GMOs contaminate - forever.
GMOs cross pollinate and their seeds can travel. It is impossible to fully clean up our contaminated gene pool. Self-propagating GMO pollution will outlast the effects of global warming and nuclear waste. The potential impact is huge, threatening the health of future generations. GMO contamination has also caused economic losses for organic and non-GMO farmers who often struggle to keep their crops pure.

3. Genetic engineering creates dangerous side effects.
By mixing genes from totally unrelated species, genetic engineering unleashes a host of unpredictable side effects. Moreover, irrespective of the type of genes that are inserted, the very process of creating a GM plant can result in massive collateral damage that produces new toxins, allergens, carcinogens, and nutritional deficiencies.

4. Independent research and reporting is attacked and suppressed.
Scientists who discover problems with GMOs have been attacked, gagged, fired, threatened, and denied funding. The journal Nature acknowledged that a "large block of scientists...denigrate research by other legitimate scientists in a knee-jerk, partisan, emotional way that is not helpful in advancing knowledge." Attempts by media to expose problems are also often censored.

5. GMOs harm the environment.
GM crops and their associated herbicides can harm birds, insects, amphibians, marine ecosystems, and soil organisms. They reduce bio-diversity, pollute water resources, and are unsustainable. For example, GM crops are eliminating habitat for monarch butterflies, whose populations are down 50% in the US. Roundup herbicide has been shown to cause birth defects in amphibians, embryonic deaths and endocrine disruptions, and organ damage in animals even at very low doses. GM canola has been found growing wild in North Dakota and California, threatening to pass on its herbicide tolerant genes on to weeds.

Short and Medium versions are available to download from:http://www.responsibletechnology.org/...

Thanks for watching and remember to give a Thumbs Up and Subscribe!