The disciple talks about the master Masanobu Fukuoka

Larry Korn is a permaculture teacher and was an apprendite of Masanobu Fukuoka for 2 years in Japan and will tell us his story. Larry Korn is a soil scientist, agricultural consultant/activist and permaculture designer who lives in Ashland, Oregon. He lived in Japan for four years, two of them on the farm of Masanobu Fukuoka. Mr. Fukuoka developed a unique way of natural farming that involves no plowing, no agricultural chemicals, no mechanical weeding or prepared compost. He doesn’t flood his rice fields as farmers in Asia have done for thousands of years and yet his yields are comparable or exceed the most productive farms in Japan. Mr. Korn translated and edited Mr. Fukuoka’s landmark book, The One-Straw Revolution.

I met Larry during a permaculture course at the Sahale Learning Center in southwest Washington in February, 2010. Following is a slightly edited version of our conversation. 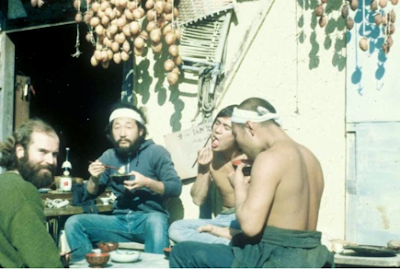 David: What led you to get involved in sustainable agriculture?

Larry: I grew up a city boy in Southern California and was always interested in Asian culture. I studied Chinese history at UC Berkeley in the late 1960’s. After I graduated, I decided to travel to Asia for an adventure to see what it was like there. I met Japanese friends from the back-to-the land movement while I was in Japan and spent time hitch hiking from one rural commune to another. I fell in love with nature and with gardening and farming. I returned to Berkeley and got a degree in soil science and plant nutrition. Everything I have done since then has involved plants and soil.

David: How did you happen to meet Mr. Fukuoka?

Larry: I had heard of Mr. Fukuoka on my first visit to Japan, from the commune people and from friends who were studying at spiritual centers. They all had great respect for him, but no one had actually been to his farm. When I returned to Japan in 1974, I lived with friends on a farming commune in the mountains north of Kyoto. We used the organic techniques farmers used there until the end of World War II. Finally, I decided to travel to Shikoku Island to see Mr. Fukuoka’s farm for myself.

At the time, Mr. Fukuoka was accepting students to live on his farm to learn about his techniques and his back-to-nature philosophy. When I saw his rice fields, which hadn’t been plowed for more than 25 years, and his citrus orchard, which included a riot of plants such as weeds, clover, vegetables and herbs growing in the spaces beneath the commercial Mandarin orange trees, I pretty much stopped what I was doing to learn more about it. Besides, it seemed like a lot of fun and I was out for adventure.

David: What was it like living on Mr. Fukuoka’s farm?

Larry: There were about six or eight of us living in rustic mud walled huts at any given time. We worked in the orchard chopping firewood, cutting the ground cover back, thinning fruit, harvesting, taking care of the chickens and the goats or whatever the seasonal jobs were at the time. We also managed the rice fields. Mr. Fukuoka grew rice and barley in the same fields each year. He had a continuous ground cover of white clover growing under the grain and returned all the straw to the surface to act as mulch and create green manure.

Mr. Fukuoka instructed us on things like farming techniques, how to care for tools, and most importantly, the philosophy that led him to farm in his unusual way. He gave us 10,000 yen each month, about $35 then, to buy things like soy sauce and vegetable oil which are not practical to produce on a small scale. Otherwise, we lived entirely on what we produced in the rice fields and the orchard. It was a lot of work, but all together a wonderful time and a great experience.

David: Tell me about The One-Straw Revolution. How did you decide to translate it and how did you get it published in the United States?

Larry: Mr. Fukuoka was respected as a philosopher in Japan at the time but his farming techniques were generally considered eccentric and out of the mainstream. His orchard and fields did not look like the neat well-kept farms of the typical Japanese. But those of us who worked there knew how important his example could be to the rest of the world. The One-Straw Revolution had just come out in Japanese, so three of us decided to translate it into English.

Once we had a decent manuscript, I brought it to the United States to find a publisher. I managed to get a copy to Wendell Berry. He took the book under his wing and made sure that everything went right with it. Besides writing the preface, Wendell also worked with me for over a year on the copy editing. The book has now been translated into about 25 languages, all from our English language edition.

David: You had an opportunity to study both with Mr. Fukuoka and Bill Mollison, the founder of permaculture. Are permaculture and natural farming essentially the same?

Larry: Fukuoka began his work in natural farming in the late 1940’s. Permaculture One, Mollison and Holmgren’s first book about permaculture, came to the United States in about 1980. One could say that Fukuoka’s farm is a perfect permaculture model. It incorporates all of the interconnected features and functions that permaculture teaches. But there is a fundamental difference. Permaculture is a design methodology. The designer, after careful observation, taking into consideration the various characteristics of the site, the soil and the water situation, the influence of the sectors such as aspect, wind, danger from fire and so forth, consciously creates a design. Then the design is implemented with the knowledge that the design will change over time in line with natural succession.

Fukuoka sees the human intellect as the main culprit in separating humanity from nature. He would rather keep human decision making as far out of the process as possible. “People use their intellect to try to improve upon nature and you see the result.” Sure, he tried experiments but only to allow nature to show him the way. And yet, he and permaculture arrived at essentially the same place. I think that is because they both use nature as their model, and that can only lead to an ecological way of farming.

David: What are your favorite plants?

Larry: That’s a little like asking which is one’s favorite child or niece or nephew. Wait a minute, actually I do have a favorite plant. It’s the coast redwood (Sequoia sempervirons). I fell in love with the redwood forests during family camping trips when I was a child. If you have never visited the old growth redwoods in Northern California you should. For me it is the closest place to heaven on earth.

To know more about Bill Mollison and Masanoubo Fukuoka

Thank you for your comments and for subscribing