Largest Living Organism on earth...
A Fungus Among Us
Armillaria Spp 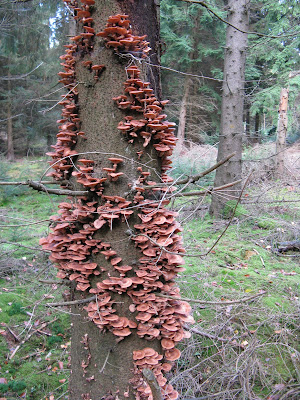 People have known about the "honey mushroom" for some time, but were not aware of how large and invasive this species of fungus could be.

The fungus was investigated more closely by researchers when they realized that it was responsible for killing large groves of evergreen trees.

When foresters cut into an infected tree they would find spreading white filaments, mycelia, which draw water and carbohydrates from the tree to feed the fungus

.
Researchers collected samples of the fungus from a widespread area and analyzed the DNA.
A large sample of the specimens they collected turned out to be from a single organism.

Until August of 2000 it was thought that the largest living organism was a fungus of the same species (Armillaria ostoyae) that covered 1,500 acres (600 hectares) found living in the state of Washington. But then mycology experts surmised that if an Armillaria that large could be found in Washington, then perhaps one just as large could be responsible for the trees dying in the Malheur National Forest in the Blue Mountains of eastern Oregon.
Researchers were astonished at the sheer magnitude of the find.
This most recent find was estimated to cover over 2,200 acres (890 hectares) and be at least 2,400 years old, possibly older. 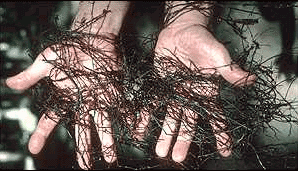 To go into the forest where this giant makes its home you would not look at it and see a huge, looming mushroom. Armillaria grows and spreads primarily underground and the sheer bulk of this organism lies in the earth, out of sight.
Occasionally, during the fall season, this specimen will send up golden-colored "honey mushrooms" (see photo, above left) that are the visible evidence of its hulking mass beneath. Scientists have not yet begun to attempt to estimate the weight of this specimen of Armillaria.
How is it possible for a single fungus to get so big?
Scientists who study this species of funges have postulated that the huge size may be a function of the dry climate in eastern Oregon. Spores have a hard time establishing new organisms, making room for the old-timers to spread. Without competition from other specimens this enormous Armillaria has been able to grow and spread unchecked.

The fungus, also known as the honey mushroom, spreads below ground by sending out these stringy rhizomorphs.

And yes, the honey mushrooms are supposedly edible, but apparently not very tasty. Several Extreme Science readers wrote to complain that yes, in fact, the Honey mushrooms are very tasty. Good taste is a matter of opinion and if you will allow me an opinion, I don't care for any mushrooms, honey or otherwise. 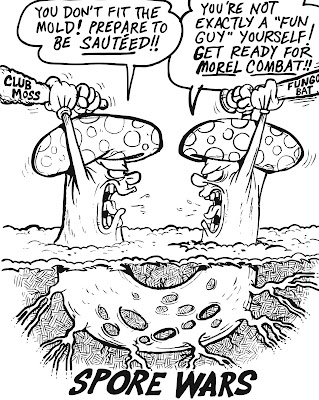