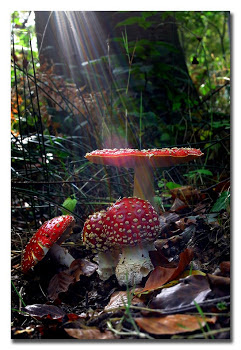 Some Unusual & Interesting Facts About Mushrooms

1. Mushrooms are fungi. Fungi are as uniquely different from plants as plants are from animals. In fact, fungi and animals are now in the same super-kingdom, Opisthokonta.

2. Fungi recycle plants after they die and transform them into rich soil. If not for mushrooms and fungi, the Earth would be buried in several feet of debris and life on the planet would soon disappear.

3. The oldest mushroom found in amber is from 90 million years ago—a Cordyceps. Scientists recently discovered a fossil first uncovered in 1859 and named Prototaxites, dating back more than 420 million years, a time when the tallest plants were around 2 feet tall. Prototaxites was 3 feet tall laying down, but if standing was nearly 30 feet high. In either case it would be the tallest organism on land...and it was a giant fungus!

4. Some of the oldest living mushroom colonies are fairy rings growing around the famous Stonehenge ruins in England. The rings are so large that they can best be seen from airplanes.

5. Some mushrooms produce compounds that fight cancer! This was discovered when scientists in Japan found that a community had unusually low cancer rates. The scientists discovered that the members of the community grew and ate many Enokitake mushrooms!

6. You can make beautiful colors by boiling wild mushrooms andipping cloth in the resulting broth. The books Mushrooms for Dyes, Paper, Pigments & Myco-Stix™ and The Rainbow Beneath My Feet tell you how to make dyes with mushrooms (get your parents to help you).
7. Many mushrooms grow towards light, following the sun just like plant. Unlike with plants, scientists do not yet know how mushrooms use sunlight; only that they do.

8. The spores of mushrooms are made of chitin, the hardest naturally-made substance on Earth. Some scientists suspect that mushroom spores are capable of space travel; a few even believe that some fungi found on Earth originally came from outer space! (Others believe that people who think this must be from outer space themselves.)
9. Under the right conditions, some mushrooms' spores can sit dormant for decades or even a century, and still grow!

10. Mushrooms are useful not only as food and medicine; some are also being used in bioremediation, to absorb and digest dangerous substances like oil, pesticides and industrial waste, in places where they threaten the environment.