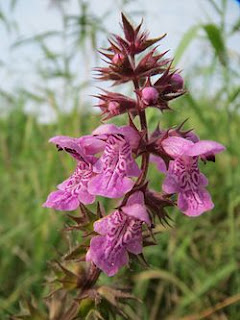 If you would like some roots to grow at your garden please send an email to newpermies@gmail.com 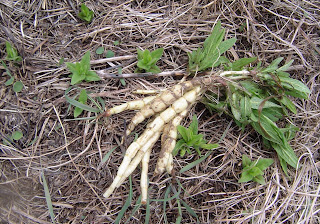 Stachys palustris is a PERENNIAL growing to 1 m (3ft 3in) by 0.4 m (1ft 4in). It is hardy to zone (UK) 5 and is not frost tender. It is in flower from July to September, and the seeds ripen from August to October. The species is hermaphrodite (has both male and female organs) and is pollinated by Bees. It is noted for attracting wildlife. 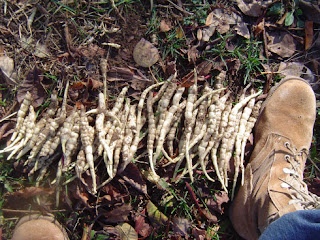 Tubers - raw or cooked[K]. A wholesome and nutritious food[4], they have a pleasant mild nutty flavour[K]. The tubers can be dried and ground into a powder that is used in making bread etc[2, 4, 12, 115, 183]. The tubers are formed in the autumn[17]. Although quite small, they are fairly smooth and produced in a reasonable quantity so are not too fiddly to utilize[K]. Young shoots - cooked. Used as an asparagus substitute[183]. A pleasant taste

Although the marsh woundwort has little fragrance, it is very attractive to bumblebees. Nectar indicators guide the insect to probe into the centre of the flower and the anthers of the stamens and the pistils are correctly located for the insect to transfer pollen between flowers. The seeds of this plant disperse well, the dry fruit capsules float away and this probably why the plant is frequently found on the banks of lakes and other bodies of water. It also spreads vegetatively by means of hollow tuberous root which can throw up shoots far from the original plant.[9] The plant is antiseptic, antispasmodic, emetic, emmenagogue, expectorant, haemostatic, nervine, sedative, tonic, vulnerary[4, 61, 218]. The plant has been highly valued for its wound-healing activity, being effective against both internal and external bleeding, and is also used in the treatment of gout, cramps and pains in the joints[4]. The herb is harvested in the summer when just coming into flower and can be dried for later use[4]. 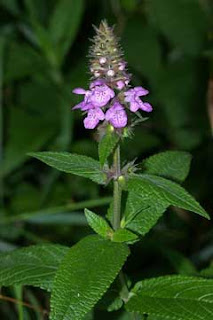